Rail tracks and homicides in Toronto 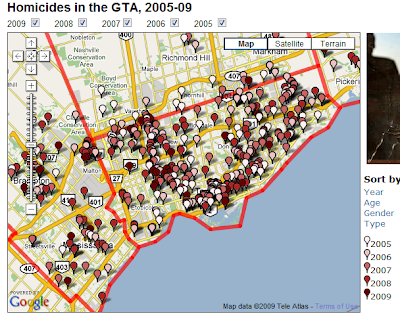 I couldn't help but notice that there were a significantly large number of homicides committed in the vicinity of rail racks in the Greater Toronto Area. There is something about the land use that accompanies rail tracks that makes it more suited for criminal acts.

The annoying neighbours who are often intrigued by what is hot or not in your life act as deterrent against crime. Rail tracks offer no neighbours with prying eyes and hence the higher propensity of crime in such areas. Also notice that the rail tracks form a horseshoe or 'U' in the middle of the city, which also marks the most poverty ridden areas in the GTA

The Toronto Star has been keeping a watch on murders in the GTA. The following website offers a Google map of the GTA with homicides as an overlaying layer. You can click on an incident to read up on details about the crime and its loaction:

Lastly, the map shows that victims often reflect the ethnic complexion of the neighbourhood where the crime took place. For instance, the suburb of Brampton in the GTA is known for its large South Asian population. A relatively large number of murder victims were of South Asian origin in Brampton.