Scan all containers, not just the suspicious ones

Business-school research: No longer all at sea
How to improve shipping-container security 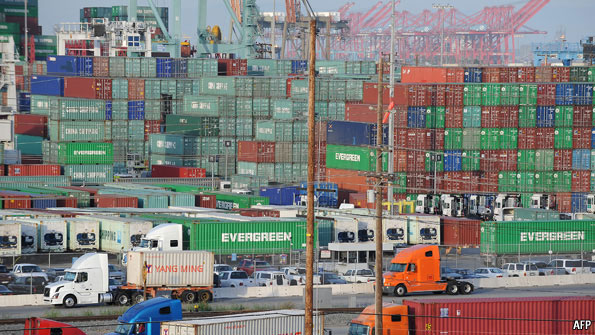 In January, the port of Los Angeles received more than 330,000 TEUs (twenty-foot equivalent units, the standard measuring unit for shipping containers). The possibility that one of those 330,000 containers could have contained a dirty bomb, or worse, keeps security experts up at night. Legislation passed in 2007 requires that every single container entering the United States must be scanned for a potential weapon.
Currently the Customs Bureau receives information on containers’ shipping manifests, which must be transmitted at least 24 hours before departure. If the manifest looks suspicious, the container in question must be taken out of the queue, inspected, and returned to its place. This process can be cumbersome. Stephen Flynn, a Coast Guard veteran and president of the Centre for National Policy, a security-focused Washington think tank, points out that the largest ships begin loading containers 18 hours before departure, making it difficult to find finding the potential offender. Try to handle more than the small fraction of containers which currently get scanned and the whole inspection line becomes, in Mr Flynn’s words, “constipated.”
Just how constipated becomes apparent in modelling done by Nitin Bakshi of London Business School and Noah Gans of Pennsylvania’s Wharton School of Business, who co-authored a recent Management Science paper with Mr Flynn on the question of port security. Using two months’ data from two large international container terminals, Mr Bakshi and Mr Gans created a simulation to gauge what delays would result if the Customs Bureau began requiring that all inbound containers be evaluated. Inspecting only 7% of containers, they found, would mean delays for nearly every single container.
How, then, can the Customs Bureau meet the legal mandate of scanning every container without perpetually snarling ports? Messrs Bakshi, Gans, and Flynn propose an alternative approach. Instead of singling out only those containers whose documentation raises questions, terminal operators would X-ray every container, regardless of its eventual destination. Only those containers flagged during the low-level scan would be subjected to a more thorough search. Think of it as everyone who will be boarding a plane having to go through security, as opposed to a select few being asked to leave their seats and answer questions as the plane was about to depart.
The authors call their approach “industry-centric,” since the terminal operators would play a greater role in the scanning (and bear the corresponding cost). It has several advantages: the entire “dwell time” of a container at the port, not just the last 24 hours, can be used to evaluate its safety. More to the point, subjected to the same simulations as the current inspection process, the industry-centric approach handled all the modelled container traffic with far fewer problems.
The authors intended their paper for two audiences. One are the general shipping and logistics firms. The other is policymakers, who might have given up hope of the possibility of achieving full port scanning. But for them the paper leaves important questions unanswered. How would other countries react to their inbound containers being scanned in an American initiative? For that matter, how would the prospect of scanners in Hong Kong being responsible for scanning goods bound for Los Angeles play politically? Who would control the data resulting from millions of container scans?
This may be why, as Mr Flynn suggests, some political courage would be necessary to change current container security procedures. At least the courageous policymaker will have some research to wave at opponents.

Posted by Murtaza Haider at 3:07 PM