The X-Factors: Where 0 means 1

Consider the following example where I present a data set with two variables: x and y. I represent age in years as 'y' and gender as a binary (0/1) variable as 'x' where 1 represents males.

I compute the means for the two variables as follows:

Now let's see what happens when I convert x into a factor variable using the following syntax:

The above code adds a new variable male to the data set, and assigns labels female and male to the categories 0 and 1 respectively.

I compute the average age for males and females as follows:

See what happens when I try to compute the mean for the variable 'male'.

Once you factor a variable, you can't compute statistics such as mean or standard deviation. To do so, you need to declare the factor variable as numeric. I create a new variable gender that converts the male variable to a numeric one.

I recompute the means below.

Note that the average for males is 1.45 and not 0.45. Why? When we created the factor variable, it turned zeros into ones and ones into twos. Let's look at the data set below: 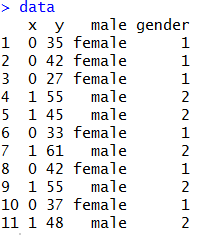 Several algorithms in R expect the factor variable to be of 0/1 form. If this condition is not satisfied, the command returns an error. For instance, when I try to estimate the logit model with gender as the dependent variable and y as the explanatory variable, R generates the following error:

Factor or no factor, I would prefer my zeros to stay as zeros!

Posted by Murtaza Haider at 4:30 PM