The latest figures have revealed that the foreign direct investments (FDI) fell by a $0.7 trillion in 2009.  The US and China remained the largest magnets for FDIs.

India, however, has to be looked in a different light. Compared with FDI, the sums sent home by the expatriate Indian workers are by far significantly large, which shows that one should have a more composite instrument of measuring an economy’s ability to attract all foreign capital that arrives within its borders legally.

Also FDI fell by only 2.6% in 2009 in China and in fact FDI increased in Germany and Italy over the same period.

From the weekly Economist

Foreign direct investment is on the wane

THE flow of foreign direct investment (FDI) fell by 39% in 2009 to just over $1 trillion, from a shade under $1.7 trillion in 2008, according to the UN Conference on Trade and Development. All kinds of investment—equity capital, reinvested earnings and intra-company loans—were affected by the downturn. Rich countries saw FDI inflows plunge by 41%, and foreign investment into developing countries fell by more than a third. Not every country was badly hit. FDI into China, where economic growth remained robust, declined by only 2.6%. Foreigners actually invested more in Germany and Italy last year than in 2008. Despite FDI plunging by 57% last year, America remained the world’s top investment destination. 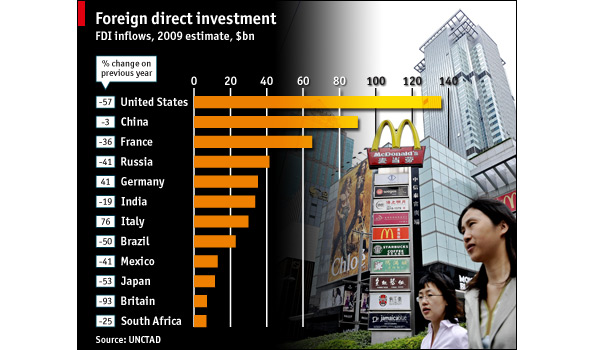 Posted by Murtaza Haider at 8:25 AM