[Revised on Feb. 02 after receiving input from a colleague at the Ted Rogers school of Management]

A recent report by OECD reveals the extent of poverty in Israel where  one in five people lives in poverty.

Israel is still a candidate to join the OECD. Poverty in Israel has not been the focus in the past where most deliberations about Israel have focussed on the Arab-Israeli conflict, or the strong high-tech performance and innovation in Israel that supported the economy.

The latest figures revealed that the percentage of population in households earning less than half of the national median income is around 20% in Israel. The same definition of poverty when applied to Canada suggests that almost13% are poor in Canada. 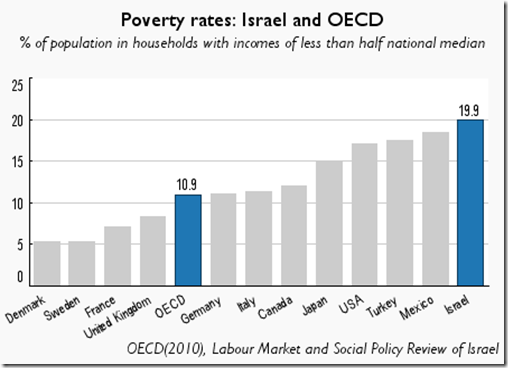 Another disturbing trend in Israel is that 40% of the working age population does not work. Two groups stand out for the low labour force participation rates in Israel. The labour force participation rate is significantly low amongst the Arab women (who live in Israel) thus resulting in a relatively smaller workforce comprising the Israeli Arabs in general. Only one in five Arab Israeli women and 60% of the Arab men are employed. While a segment of the Arab women may have opted out of the labour force for cultural or other reasons, the low employment rate amongst the Arab males is difficult to explain . Furthermore, even the employed Arabs in Israel do not earn much since their wages are 60% of the average wage of non-Arab workers. This results in a very high incidence of poverty amongst the Israeli Arabs.

The other group comprise the ultra Orthodox Jews (Haredim) who are not active in the labour market because they focus on pursuing religious studies for which they receive financial support from the State. According to OECD, almost 50% of the Haredim women and only 25% of Haredim men hold jobs. The rest remain active with their religious responsibilities under State patronage.

Israel has a highly segmented labour market, with Arabs and Haredi workers frequently having low-paid jobs. Overall, the proportion of people with relatively low earnings – two-thirds of the economy-wide median – is, like Canada, Hungary, Korea, Poland, the United Kingdom and the United States – in the 20-25% range (Figure 2 [reproduced above]). But Arab women and Haredi workers earn an average of around 70% of the economy-wide average wage. For Arab men, this figure is just 60%.

The dynamic high-tech sector, which accounts for 40% of Israel’s exports, offers attractive working conditions, but only provides 7% of jobs. Blue- and white-collar workers in long-established enterprises and civil servants also have good working conditions. But many workers outside these sectors – particularly those in low-skilled jobs in agriculture, construction and tourist services, for example – have low pay, few training opportunities and little job security. 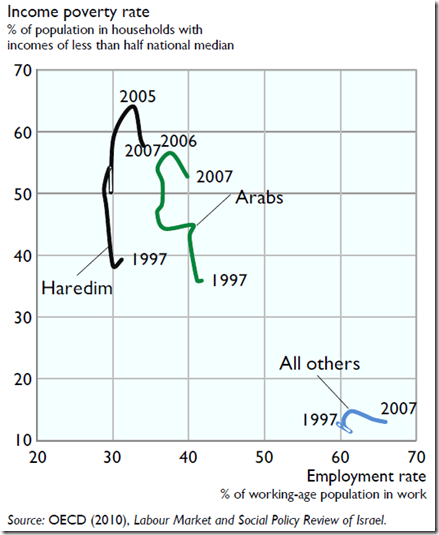 The fertility rate of the Arab Israelis and the Haredim are the highest in Israel. Almost 50% of the children entering the primary schools in Israel belong to these communities. This suggests that the rate of unemployment may rise in Israel in the future because of the rapid increase amongst the cohorts that do not work for a variety of reasons, and even when they do, their wages are much lower than that of the rest of the workers.

Another complication results from the fact that the children belonging to Arab and Haredim households mostly attend private schools or institutions that receive partial funding from the State. The downside of such practice is that integration of Arab and Haredim children with the children in the mainstream public school system becomes a challenge resulting in children being raised in ideological or cultural solitudes.

Given the income disparities in Israel and its unique demographic concentrations, Israel has to work hard to correct the basic fundamentals necessary to creating a society that is just and equitable.