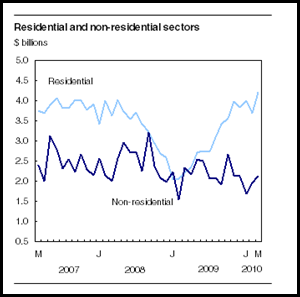 Another piece of strong housing data out of Canada yesterday with April housing starts edging up 1.3% MoM, to 201.7k annualized units (though slightly missing analysts’ expectations of an increase to 205k). The details were mixed with single-family starts (a good baramoter for underlying demand) dropping nearly 13% while multi-starts (ie, condos) jumped 27% on the month.

If we take a step back from the monthly volatility, what is interesting to note is that household formation rates are at about 175K annualized and housing starts have been running at-or-above that level for the past seven months, suggesting that inventories of new homes are building. Using a different approach, housing starts (ie, supply) were up at whopping 80% YoY in April and existing home sales (ie, demand) are running at less than half that rate on a YoY basis. Using this approach, we estimate that supply as been outrunning demand for about 2-3 months, another indication that inventories may be building. In fact, the latest data release for existing home sales showed, on a seasonally adjusted basis, months’ supply in March were higher than in the previous four months.

We are likely to see more inventories build, especially as the frenetic demand seen in the first half of the year dries up in the second half due to higher mortgage rates, a more restrictive lending environment and the impending HST — all of which will ultimately pressure home prices downward.

Whereas Statistics Canada reported the following:

Municipalities issued $1.5 billion worth of multi-family permits in March, up 53.6% from February, its highest level since July 2008. Ontario and British Columbia accounted for most of the increase, although six other provinces showed higher intentions for the construction of multiple dwellings. In contrast, Quebec posted a large decline following an increase in February.

Nationally, municipalities approved construction of 19,469 new dwelling units in March, up 21.1%. The gain was largely attributable to multi-family dwellings, which rose 46.0% to 10,038 units. This was the first time since July 2008 that the number of multiple units surpassed 10,000. The number of single-family dwellings approved increased 2.5% to 9,431 units.

Posted by Murtaza Haider at 9:30 AM