To arrest the sharp increase in single occupancy vehicles in North America, transport planners and engineers devised the High Occupancy Vehicles (HOV) lanes dedicated for those vehicles that carry two or more passengers.

The HOV lanes have met limited success in North America in mitigating traffic congestion. Their utility in other parts of the world has been largely unpredictable. Consider the following photograph where a mother and child her standing on a freeway in Jakarta offering their services as car jockeys for a pittance to affluent drivers who would otherwise be not allowed to drive on less congested HOV lanes.

Transport policy, like all other policy domains, is sensitive to local norms, cultures, and economic frameworks. What may work in an American city may not necessarily work in an other city in a developing country. 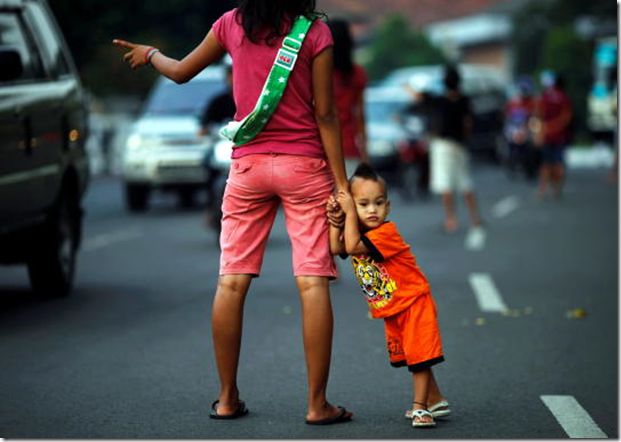 A jobless mother holds her child as she offers to be a car jockey in a main street in Jakarta. Many unemployed Indonesians find work as car jockeys, for which they are paid around 15,000 rupiah to be car passengers, allowing the driver to use a lane dedicated to cars carrying three or more passengers.