A not-so-intellectual debate about the interest rates

An interesting debate has started between two leading American economists, Paul Krugman and Raghuram Rajan. Krugman wants the interest rates to be kept low whereas Rajan wants them to be raised gradually.

The difference in opinion is not merely academic, but cultural as well. Rajan is rooted in the academic culture in which an academic usually resides in an isolated intellectual universe and is seldom voted out of the job for offering the wrong advice. Therefore, Rajan advocates raising interest rates without waiting first for the unemployment to decline.

Krugman, on the other hand, is not just an economist, but also a popular columnist and an avid blogger. He is also a political animal and realizes that in a very interdependent society the interest rates would impact unemployment, which would eventually determine the electoral outcomes. Notice in the following graph a lagged increase in unemployment rate after interest rates were raised. 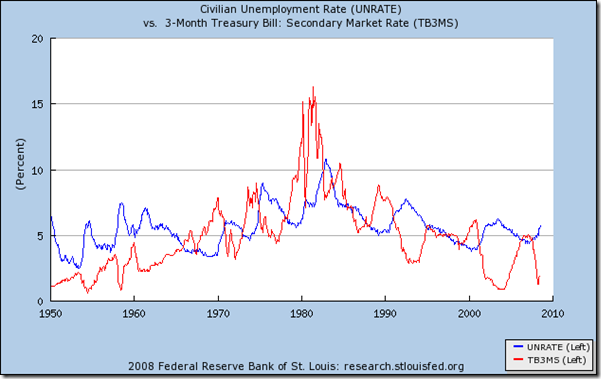 Raising interest rates, even gradually, is likely to force more out of work, which could eventually lead to the President of the United States and other Democratic legislators losing their jobs in the forthcoming elections.

Posted by Murtaza Haider at 1:57 PM