As citizens of a country that ends up in armed conflicts all over the world, Americans should know a thing or two about geography. Recent polls over several years however have shown that the American youth cannot locate even those countries on a map where the US has been involved in an armed conflict. A May 2006 poll revealed the following:

Take Iraq, for example. Despite nearly constant news coverage since the war there began in 2003, 63 percent of Americans aged 18 to 24 failed to correctly locate the country on a map of the Middle East. Seventy percent could not find Iran or Israel.

Nine in ten couldn't find Afghanistan on a map of Asia.

And 54 percent were unaware that Sudan is a country in Africa.

Remember the December 2004 tsunami and the widespread images of devastation in Indonesia?

Three-quarters of respondents failed to find that country on a map. And three-quarters were unaware that a majority of Indonesia's population is Muslim, making it the largest Muslim country in the world.

And then there is Miss South Carolina in Miss Teen USA 2007 pageant with her illustrating answer about the causes of such ignorance amongst the “US Americans”. Watch the 49 second clip below and you will see how deep-rooted the problem is as she explores the reasons behind why 20% of the Americans couldn’t locate  their own country on a map. 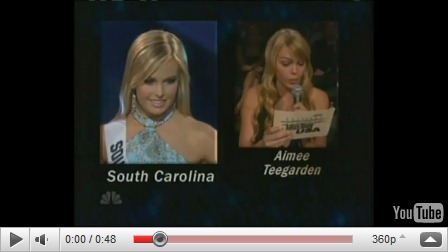 Causes of geographic illiteracy amongst “US Americans”
Posted by Murtaza Haider at 9:45 AM