Unemployment holds steady at 8.5% in Canada 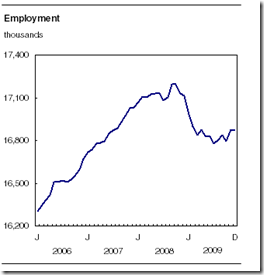 In December, there were a number of offsetting changes by industry. Employment rose in health care and social assistance, as well as in professional, scientific and technical services. The largest declines were in transportation and warehousing; business, building and other support services; and public administration.

In recent months, a number of industries have contributed to the stabilization in employment. A notable shift has occurred in construction, which had been on a downward trend and is up 30,000 since March.

In December, employment increased in Alberta, while it declined in Manitoba and New Brunswick. In recent months, employment in Quebec, Ontario and British Columbia has been on a slight upward trend.