Canada’s Conservative government has twice prorogued (suspended) the Parliament since 2008 to avoid loosing control over the government.  In 2008, the prorogued Parliament attracted the interest of all Canadians.  However, based on the searches conducted on Google during 2008 for the word prorogue suggest that the focus on the incident was more pronounced in Alberta, which is the political base of the Conservatives in Canada. It is fair to assume therefore, that the internet-based interest in 2008 over proroguing of the Parliament in Alberta was not based out of discontent, but perhaps support and loyalty to the Conservative cause. 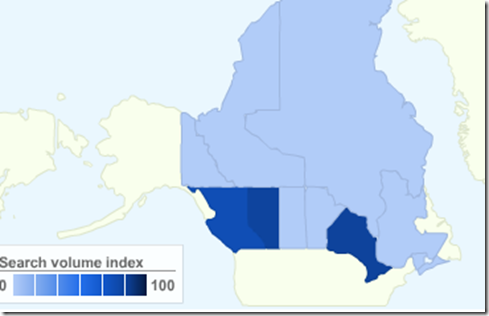 Spatial distribution of the interest in “prorogue” in Canada during Nov. 2008 and Jan. 2009.

By the end of 2009, however, the political landscape had changed to some extent in Canada. Conservatives had been battered by the opposition all through the year forcing Premier Harper to suspended the Parliament yet again in December 2009 to avoid debate on the Afghan prisoner controversy that could implicate Canada in the torture of Afghan prisoners handed over by Canadians to the Afghan security forces.

In 2009-2010, the interest in prorogued Parliament is lightly different. Unlike 2008, when Alberta scored the highest in internet searches for the word prorogue, the focus on the word was concentrated in provinces where Conservatives do not have a strong base, i.e., Nova Scotia, British Columbia, and Ontario.

This time around, most Canadians searching the meaning of prorogue, and perhaps democracy, on the Internet are doing so with anger and disgust. 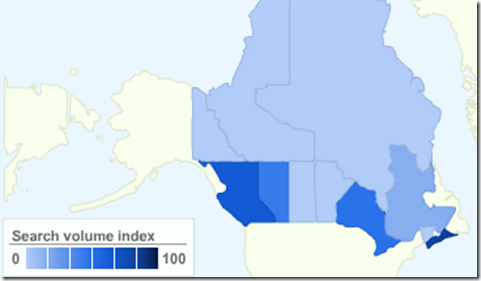 Spatial distribution of the interest in “prorogue” in Canada during Nov. 2009 and Jan. 2010.

Lastly, the Internet searches suggest that Canadians have very short political attention span. In 2008, the interest in prorogued Parliament peaked around Nov. 30 and then dissipated soon afterwards. The length of the political crises did not capture Canadians’ fancy for even a month (see the graph below). The story is all the same in 2009-10.

If Canadians desire to be governed with respect, they have to stay focussed on what concerns them the most.   A two-week attention span is not sufficient to deliver change in governance in Canada.

Posted by Murtaza Haider at 5:53 PM