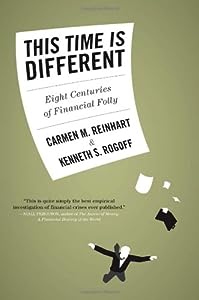 Cover via AmazonMore of ten than not, the economic forecasts are wrong.   The economists are often found revising their forecasts as new and updated data reveal a departurefrom the forecast.

The Economist magazine published the following on why bother with forecasting.

Where are the economic bubbles? How fast will China grow? When and where will the debt crisis strike? How large should the economic stimulus be? And at its most basic: when should I invest, and where?

There's just one problem: economists have a poor track record for getting it right.

So what are "the perils of economic prediction"? A session at Davos tried to find out, with five of the world's top economists at hand to defend their profession.

It's all a question of timing

Nearly every economic forecast will come true at some point. It's just a question when. Poor economic forecasts can be a bit like a broken clock; it shows the correct time twice a day, when the hour comes around.

Still, economists can see where the problems are, and sense who is vulnerable to a crisis, argues Professor Carmen Reinhart from the University of Maryland, and author of "This time is different: eight centuries of financial folly".


Africa's economy was notoriously difficult to predict, says Raghuram Rajan
But if you want to get the timing of a crisis right, then "good luck with that," she says.
"We always failed to predict the [economic] turning point," admits Raghuram Rajan, looking back at his days as director of research at the International Monetary Fund (and now at the Chicago Booth School of Business).

"We were always wrong on Africa," he says. His team would issue a forecast for the continent, then conflict would break out somewhere, making the local economy plummet 20%, wrecking the prediction.

If economics is a science, then it's not a very exact one.

Think how difficult it is to predict the weather. Overall, though, weathermen do ok, because they know their limits; they look four or five days ahead, but not much more.

The weather follows certain immutable rules, so its models can be based on experience.

It's different for economists. Their models are based on what used to happen, but the ingredients of the economy - humans, resources, wars, natural disasters, technology etc - change constantly.


Economic models are flawed, warns Robert Shiller
"The economic profession got too much in love with its models," says Professor Shiller.

And do these models take account of all factors? Emerging markets are attracting huge investments, but is that because economic fundamentals have changed, or because US interest rates are low and investors are searching for higher returns, asks Professor Reinhart.

And then there is human nature, with people always saying that rules apply to other people only. After the Mexican financial crisis in the early 1990s, she remembers, Asians said that these things happen only in Latin America - only for a similar crisis to hit Asia a few years later.

The right kind of economics
So it's not always the economists' fault; it's people who pick and choose what they want to believe.

Joe Stiglitz, former chief economist at the World Bank, recipient of a Nobel Prize in Economics and now with Columbia University, says the financial crisis did prove economics right, it's just that most people applied "the wrong economics".

And there is still a lot of work to be done. Professor Shiller apologised to the audience when he briefly delved deep into a mathematical model - "is anybody still with me?" - but he wanted to make the point that economists were still struggling to understand the feedback loops of the credit crunch.

Why bother?
Paradoxically, while everybody knows that forecasts are mostly wrong, "everybody still demands them," said the senior economist of a large banking group, speaking off the record.

To make things worse, he said, economists - just like investors - were suffering from a very bad case of "group think" where "everybody is unwilling to stick their nose out" and challenge the consensus.

"If you step outside the comfort band of the consensus forecast," agrees Simon Johnson from the MIT Sloan School of Management and another former IMF chief economist, "you get beaten up, you can risk your career."

This consensus, in turn, will make an impact, warns Professor Stiglitz: "If the chairman of the Federal Reserve says we have a new paradigm, and other economists say he's wrong, who will people believe? People will believe the Fed, and that in turn influences the economic outcome.

So why bother with economic forecasts?

"It's a starting point for analysis or discussion," says the chief executive of a large asset management firm, "but you don't have to believe it... economists are just one input among many."

So how often do the economists advising his firm get it right?

Posted by Murtaza Haider at 8:48 AM