Hamburg Port may lose business because of inadequate depth

Jan. 20 (Bloomberg) -- Germany’s largest container port may lose the world’s biggest freight ships to Belgium and Holland unless it can push through plans to deepen the River Elbe.

Environmental groups and a neighboring state opposed to the 385 million-euro ($516 million) project have delayed it for three years, preventing the biggest container ships from entering the northern port of Hamburg at full capacity. Shares of Hamburger Hafen und Logistik AG, which handles two thirds of the containers that go through the shipping hub, have dropped 42 percent since 2007.

“It’s extremely important for the investment case that this gets done,” said Igor de Maack, who helps manage 5 billion euros at DNCA Finance and Leonardo Invest Fund in Paris, including Hamburger Hafen stock. “I hope the Germans will make a wise decision as this port matters a great deal for trade and for Germany as an export-dependent nation.”

Europe’s largest economy is increasingly reliant on exports to Asia, 71 billion euros of which went by ship in 2009. Hamburg handles 25 percent of the country’s sea-bound exports, and Asia accounts for almost 60 percent of its cargo volumes. Shipping companies have increased orders for big vessels that are used mainly on Asian routes and which often sit too deep for the Elbe when fully loaded.

“Hamburg will continue to lose market share to competing north-range ports unless they improve access,” said Peter Meany, head of an infrastructure fund at Colonial First State Global Asset Management in Sydney that holds Hamburger Hafen shares. “The situation not only impacts volumes but also dilutes the pricing advantage of Hamburg’s geographic location.”

Ports around the world are preparing for bigger ships. A.P. Moeller-Maersk A/S, owner of the world’s biggest container liner, has readied facilities in New York and Houston, and the ports around Charleston, South Carolina, are dredging to accommodate larger vessels.

The waterway connecting Belgium’s Antwerp port with the North Sea was deepened last year, and Germany’s Wilhelmshaven is also being prepared to handle the world’s biggest ships by 2012. Holland’s Rotterdam, Europe’s largest port, can already handle them and is investing to expand that capacity further.

“The adjustment of the navigation channel in the inner and outer Elbe is of fundamental national importance,” said Claudia Sye, an infrastructure expert at the Hamburg Chamber of Commerce. “Further delays in the process of implementing the adjustments may involve significant losses of cargo traffic and deteriorating future prospects.”

The project to deepen the Elbe, now scheduled to proceed toward the end of 2011, has pitted Hamburg against the neighboring state of Lower Saxony, which shares the river and must agree to the plan. Lower Saxony officials are concerned that a deepening would increase the impact of the tide and waves on the levees that protect its citizens against floods.

“Economic development is very important to us, but the safety of people is our highest priority,” said Jutta Kremer- Heye, a spokeswoman for Lower Saxony’s environment ministry. The state has yet to receive an amended proposal and will probably make a decision on it in March or April, she said.

Environmental groups such as Friends of the Earth Germany say dredging the Elbe is unnecessary and would threaten its ecosystem. The river, which was just three to four meters deep in Hamburg at the start of the 19th century, has been deepened seven times since 1850 to cater for bigger and bigger boats, according to the port authority. 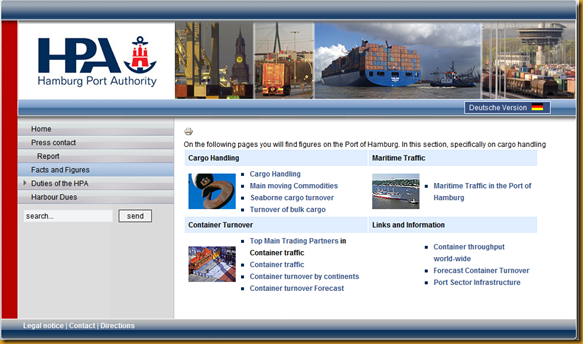 Today, vessels with a maximum draft, or water depth, of 12.8 meters can use the port with ease. During high tide, ships sitting 15.1 meters deep in the water can navigate to Hamburg from the North Sea, according to Bengt van Beuningen, a spokesman for Port of Hamburg Marketing.

The Maersk Emden, which visited Hamburg last week, is 366 meters long, 48 meters wide and has a maximum draft of 15.5 meters, according to the Port of Hamburg website, meaning it couldn’t carry its maximum load of 13,100 containers.

“These particularly large ships are used primarily in trade with China and Asia, markets in which the Port of Hamburg is the leading transshipment port in Europe,” said van Beuningen. “Any loss of services or a decline in foreign trade would not be positive for the port business.”

It wouldn’t be good for Germany either. Its exports to Asia are growing more than twice as fast as sales to other euro-area countries. Sales to Asia jumped 32.1 percent in the first 10 months of last year from the same period in 2009, Federal Statistics Office data show. That compares with a 13.4 percent gain in exports to the euro area.

Hamburg businesses and politicians say deepening the Elbe is crucial to the city’s competitiveness and retaining jobs in the region. Some 165,000 people in Hamburg and 275,000 people in Germany rely on the port for employment.

Those jobs could be compromised if the port is unable to service the growing number of large vessels.

In 2009, a fifth of the 10,871 ships that visited Hamburg required assistance from the tide. Of those, 712 were more than 330 meters long. That number rose to 827 last year and is likely to increase to more than 900 this year, according to the port authority.

Vessels able to carry more than 8,000 containers made up a record 80 percent of orders by volume for the first 10 months of 2010, surpassing the previous peak of 66 percent in 2007, according to Clarkson Plc, the world’s largest shipbroker.

For now, shipping companies are giving Hamburg the benefit of the doubt.

“We believe the port of Hamburg is taking all the necessary measures to cope on time with new requirements made by the world’s largest shipping lines,” said Marie Lopez, a spokeswoman for Marseille-based CMA CGM SA, the world’s third- biggest container shipping company. “The dispatch of very large vessels should be facilitated in the coming months and years thanks to the deepening of the channel in the River Elbe.”

Hamburg Mayor Christoph Ahlhaus is confident that work on deepening the river will start on schedule later this year.

“I am convinced that we can start work on the expansion this year as planned,” Ahlhaus said on Jan. 10 after a meeting with German Transport Minister Peter Ramsauer. “After adapting the project several times to meet environmental concerns, I believe that Hamburg can expect full support for the expansion, also from neighboring states.”

To contact the reporters responsible for this story: Niklas Magnusson in Hamburg at nmagnusson1@bloomberg.net Cornelius Rahn in Frankfurt at crahn2@bloomberg.net