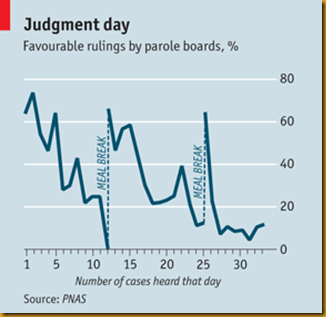 A paper in the Proceedings of the National Academy of Sciences describes how Shai Danziger of Ben-Gurion University of the Negev and his colleagues followed eight Israeli judges for ten months as they ruled on over 1,000 applications made by prisoners to parole boards. The plaintiffs were asking either to be allowed out on parole or to have the conditions of their incarceration changed. The team found that, at the start of the day, the judges granted around two-thirds of the applications before them. As the hours passed, that number fell sharply (see chart), eventually reaching zero. But clemency returned after each of two daily breaks, during which the judges retired for food. The approval rate shot back up to near its original value, before falling again as the day wore on.

Posted by Murtaza Haider at 2:10 PM