The decline of the Creative Class

Richard Florida’s pop economics worked well in the boom times. He credited the creative class (any one sitting behind a computer or an easel at work) for bringing us wealth and prosperity.

When the housing prices and CEO compensations were growing, Richard Florida’s theories seemed the answer for all our economic ills. His solution: we should turn the manufacturing and agrarian classes into the creative class; replace shovels with Adobe Photoshops, and you are set for prosperity.

The test of any economic theory or paradigm is it’s ability to withstand a (great) recession. The creative class, it appears, did not fare well during recession in the United States. The map below presents the change in personal income during 2007-08 in the United States. The blue-coloured counties are the ones with highest income gains and the yellow-coloured are the ones with the lowest income gains. Florida’s creative classes are mostly in yellow, with lowest income gains. 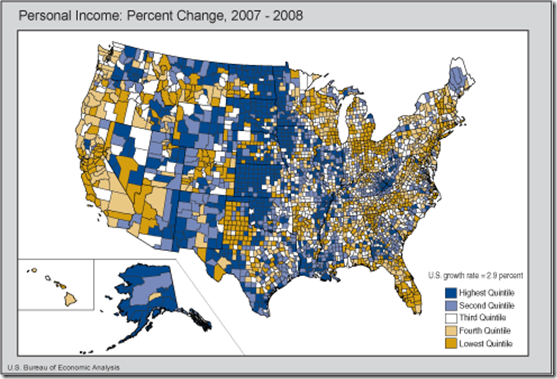 The highest gains were reported for counties with agricultural economic base. After years of declining farm incomes, agri-based counties saw a resurgent in their incomes in 2009. According to BEA:

For the nation, personal income grew 2.9 percent in 2008 after growing 5.5 percent in 2007. A surge in farm income accounted for the bulk of the growth in 29 of the 31 fastest growing counties (the top 1 percent of the nation’s counties) as they continued to rebound from sharp mid-decade declines in farm income…

Personal income is a comprehensive measure of the income of all persons from all sources. In addition to wages and salaries, it includes employer-provided health insurance, dividends and interest income, social security benefits, and other types of income…

Personal income and its components are available for 3,112 counties from 1969 to 2008. In addition, detailed annual estimates of earnings and employment, inflows and outflows of commuters’ earnings, personal current transfer receipts, and farm gross income and expenses by major category for each county are available. A partial sample of the data available is presented in the attached table for New York County, New York. These estimates are the only comprehensive annual measure of economic activity available for counties. Go to www.bea.gov/regional/reis/ to access these estimates.

A narrative describing county, metropolitan area, and state personal income using current estimates, growth rates, and a breakdown of the sources of personal income is available at www.bea.gov/regional/bearfacts/.