Electronics sales may not be electrifying this time around

While the print and electronic media remains infatuated with the latest gadgetry, predicting higher electronic sales every December, this year is likely to be different. There has been a significant decline in the searches conducted on Google by shoppers in Canada. It is hard to tell the magnitude of reduction in the sales of electronics during this Christmas. However, chances are that the overall electronic sales in Canada may experience a decline in Christmas sales.

The electronics retailing in Canada is more of a pseudo competition between the two leading retailers, Best Buy and the Future Shop (also owned by Best Buy Canada). The latest Internet searches by the shoppers in Canada suggest that Best Buy has taken over Future Shop in popularity. In 2008 and 2009, Future Shop lead Best Buy in Canada amongst shoppers’ searches on the Internet. In 2010, Best Buy has left Future Shop behind.

Also worth noting is the return of The Bay in the top 10 shopping searches in Canada. In the past, Bay has been bleeding as low-cost retailers had taken significant market share away from Canada’s flagship retailer. Also listed is Amazon amongst the top rising searches for 2010 and not Indigo/Chapters. This suggests that online book retailing is still a forte of Amazon, even in Canada.

Further evidence to my above-mentioned assertion is found the actual sales data (as shown in the graph below as seasonally adjusted monthly retail sales) which shows that sales of electronics and appliance stores (red colour line) and furniture and home furnishing stores took a tumble during recession in 2008 and that electronics sales have not recovered to the peak observed in mid-2008.

Sales at general merchandise stores (depicted as green line), on the other hand, suggest almost no impact of the recession. The upward trend in sales for such stores has continued unabated since 1996. Furthermore, the gap between the sales volume of general merchandise trade and the sales of electronics and furniture stores has continued to widen, despite the hyped media coverage of bumper sales of uber gadgets. 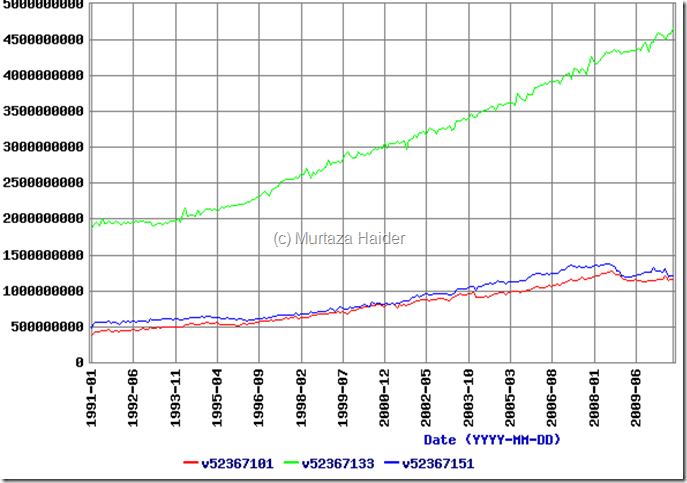 Posted by Murtaza Haider at 7:56 PM