Where is Toronto’s missing middle class? It has suburbanized out of Toronto

The report is indeed an important contribution to the ongoing dialogue on how to create socially just societies and thus serves as a scorecard on how the City performs on income inequality. The report also mentioned that the  growing number of the very poor in the City of Toronto are immigrants and visible minorities.

While I agree with the general findings of the report, and consider it a must read for those interested in cities, I have though some concerns about the methodology and some implied, yet unstated, conclusions. First the methodology. The authors have focussed on the City of Toronto and have only tangentially mentioned the possibility that the middle class may have migrated to the outer suburbs. I call this phenomenon of suburbanizing middle classes ‘the brown flight’, since immigrants from South and South-East Asia constitute a large number of the new middle class, which has settled in Toronto’s outer suburbs.

Second is the implied assumption that growing income inequality by default is at odds with social cohesion and long-term economic and social viability of the region. This assumes that the social safety nests, which are predominantly supported by the taxes imposed on high and very-high income earners, are incapable of providing short- and long-term services for the very poor in the City. Furthermore, the breakdown of neighbourhoods by income also gives the impression that there may be a socially-optimum breakdown of neighbourhoods by income categories.

I will address below only the first concern in this blog.

I have repeated the analysis done by the authors of the U of T study with two differences. Instead of using individual income, I have based my analysis on household incomes. This does not fundamentally change the distribution  of income profiles mentioned in the U of T study, however it is theoretically more consistent because income manifests itself at the household level more than it does at the individual level. For instance, a poor household is unlikely to have both poor and not poor members of the household. The pooling of income within a household  can help the household deal with poverty better than a single-person, and therefore a single-income, household. My own research on household dynamics in the Peel region suggests that single-person households are more vulnerable to poverty than the rest because of lack of monetary support from other household members. Thus using household income as a metric to study income polarization is better than using individual income.

The City of Toronto is part of the larger urban system or conurbation known as the Greater Toronto Area. Statistics Canada defines Toronto’s conurbation as the Toronto Census Metropolitan Area (population 5.1 million, Census 2006) and includes the City of Toronto (population 2.5 million, Census 2006) and the neighbouring suburban municipalities. Some even include Hamilton in the same conurbation. 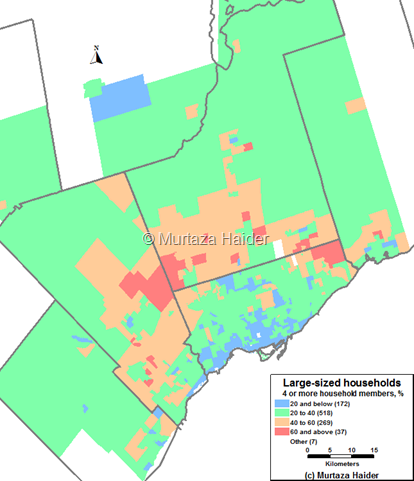 In an earlier blog on the topic I had suggested that Toronto’s middle class has migrated out of the City of Toronto and has settled in the outer suburbs of Toronto, which are part of the Toronto conurbation. The reason for outward migration of the middle class are rooted in demographics and affordable housing. The middle class comprises of growing families with children who need more shelter space at affordable prices, which is abundantly available in the outer suburbs. Furthermore, financially stable and multigenerational immigrant households abandon Toronto at an increasing rate than the rest since they crave affordable shelter space more than the rest. This creates the spatial mismatch between the shelter needs of the middle class and the small-sized, yet prohibitively expensive, housing stock available in the City of Toronto.

See the map to the right (click on it to see the larger version), which shows the percentage of households with 4 or more persons. The brown and red-coloured census tracts in the suburbs act as proof for the claim that the growing households have left for the suburbs. Similarly, the blue-coloured census tracts in Toronto along the waterfront and in areas of higher income suggest small-sized households comprising either young professionals or empty-nesters, who outbid households with children for shelter space in the choice neighbourhoods. 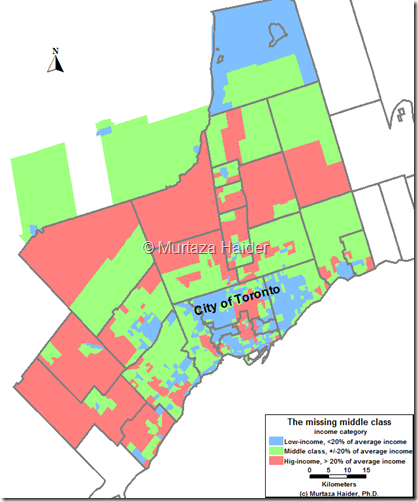 In this blog I will present evidence to my claim that income polarization in the City of Toronto is a result of the arbitrary boundaries used to define Toronto. These boundaries conform to the political and administrative boundaries of the City, but not to the housing and employment markets observed in the City. The evidence for this argument lies in the commuting patterns observed in the City. My own calculations from the 2006 place of work data from Statistics Canada suggest that almost 600,000 work trips cross City of Toronto’s boundary every day. These are the individuals who either live in Toronto (186,555 trips) and work in the suburbs, or the suburbanites (407,535) who work in Toronto and cross the arbitrary boundaries, which delineate the City, twice every day.

See the map to the right (click on it to see the larger version),  where I have depicted municipal boundaries in grey colour. Also shown are the pre-amalgamation boundaries of Toronto’s former inner suburbs. The green colour neighbourhoods in the map depict the middle class, which is primarily concentrated in Toronto’s outer suburbs. The blue colour low-income cohorts are increasingly concentrated in the amalgamated City of Toronto making a U-shaped poverty concentration around the high-income neighbourhoods concentrated along the Yonge Street. 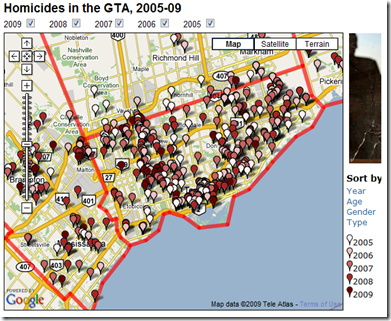 The correlation between the location of rail tracks in the City of Toronto and the spread of poverty in proximity to rail tracks has not been discussed in detail in the past. The U-shaped poverty visible in the above map is along the rail/subway tracks. Furthermore, I also noticed a significantly large number of homicides committed in the vicinity of rail racks, which are also neighbourhoods depicting poverty (see the map to the right).

Toronto’s outer suburbs are far more egalitarian than City of Toronto itself. When I reviewed the income distribution, I was able to replicate the findings from the U of T’s report. Consider the following histogram of household income that illustrates more than 60% residents in the City of Toronto (2.5 million) earn at least 20% less than the average household income ($91,579 for 2005) observed for Toronto CMA (5.1 million people). 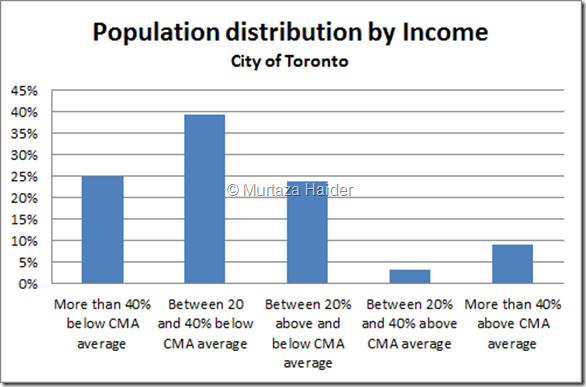 The middle class found in suburbia

The most interesting finding emerges when one plots the income distribution for the outer suburbs of the  Toronto CMA, i.e.,  after excluding the City of Toronto from the data set. The resulting histogram is presented below, which is computed for the 2.6 million suburbanites who live in the “905 municipalities”. 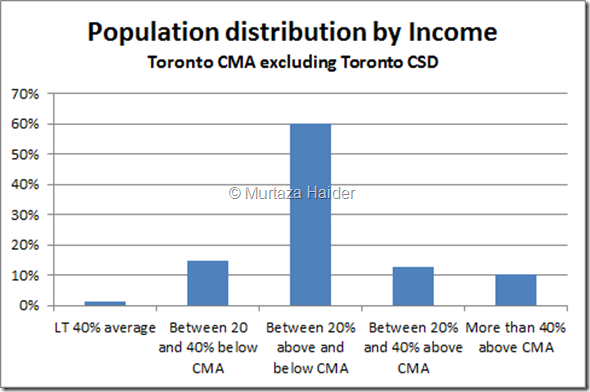 The missing middle class is right in the middle of the graph where 60% of the suburbanites live in neighbourhoods where the average household income is within the +/- 20% of the average household income for Toronto CMA. The symmetrical distribution presented in the above graph suggests that the extreme income disparities seen in the City of Toronto do not exist in the outer suburbs of Toronto.

The other main concern in methodology adopted by the U of  T study is the presence of high extreme values in the income variable. The literature on income inequality discusses the issues related with extreme values. The histogram below confirms the existence of the problem where a small number of census tracts report very high incomes in the range of $250,000 and $800,000. A naive method of correcting this problem is to use a trimmed data set that excludes extreme values. However, more statistically robust methods are readily available and have already been programmed in some econometrics software. I will address this issue later in another blog. 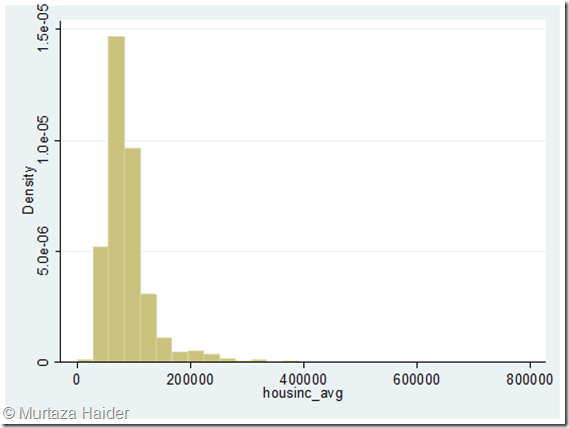 There exists in fact a greater heterogeneity in the income distributions within the region. I have plotted income distributions for the nine main municipalities, which are home to 4.6 million of the 5.1 million residents of Toronto CMA. The following graph has been truncated at a maximum household income of $250,000. The graphs below show that the peaks observed for the suburban municipalities are concentrated around the average household income observed in the region ($91,579), whereas the results are skewed for Toronto with a large number of low income concentration as well as a small number of very large income households. 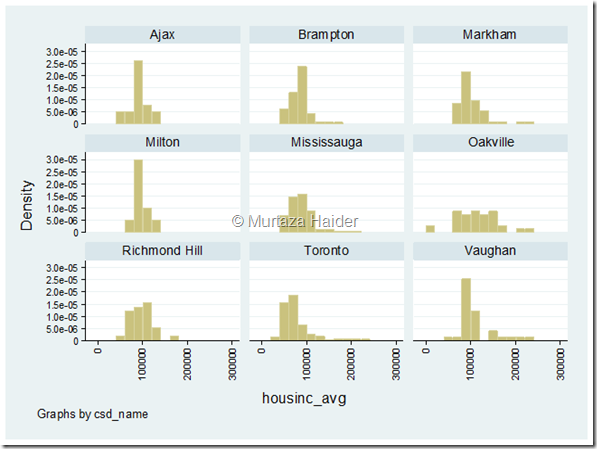 However, more interesting results are reported for the middle income categories. 68% of those whose income falls within +/- 20% of the regional average income, i.e., the middle class, lives in Toronto’s external suburbs. Furthermore, 77% of the slightly well-off households whose incomes are between 20% to 40% higher than the regional average also reside in the outer suburbs.

Posted by Murtaza Haider at 2:12 AM