The secret behind the success of rapid increase in the Bangladeshi textile exports is fast unfolding. Subjected to undignified wages, the textile workers suffered as the North American and European consumers enjoyed their clothes delivered by the retailers who outsourced not just manufacturing, but the exploitation of workers.

Inadequate labour laws in Bangladesh and other similar places has resulted in the continued suffering of workers who are now on the street campaigning for their rights or jumping to their death off the roofs of the same factories that make designer labels and technical gizmos for companies as reputed as Apple.

The following is from BBC: 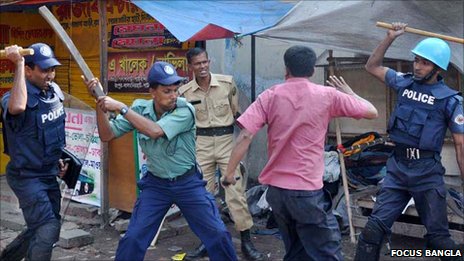 Police used batons and tear gas to disperse thousands of protesters in Dhaka and Chittagong.

The unrest came a day after demonstrations shut down factories in southern Bangladesh.

The workers say wages have not gone up, even though rises were due last month.

Local media said one of the men killed was a 35-year-old rickshaw puller in Chittagong, but it was unclear how he had died.

All three victims were reportedly shot dead. At least 50 people were injured during the unrest in Chittagong.  Almost all factories in the CEPZ are closed because of the protests, officials said.

The BBC's Anbarasan Ethirajan, in Dhaka, says demonstrations on Saturday forced a South Korean company to shut down all its 11 factories there.

Scores more were injured in Dhaka, where thousands of workers gathered outside their factory in an industrial area of the city early in the morning in protest against its closure as a result of the disturbances.

Roads in Dhaka were blocked and at least two vehicles set on fire, police said.

Labour unions say many of the factories are not implementing the new salary scale announced by a government wage board earlier this year.

From November, the factories should have been paying a wage of at least $43 (£27) a month.

Around Dhaka, workers in some factories have been protesting for a number of days, demanding increased pay.

More than three million people, mostly women, work in Bangladesh's garment industry, which supplies many major Western stores and is a key sector of the country's economy.

Posted by Murtaza Haider at 1:42 PM