The good, the bad, and the ugly in Toronto

What happened to the middle class in Toronto? University of Toronto's urban/social geographer, David Hulchanski, and colleagues argue that the middle class has disappeared from Toronto in a recently released update on the growing income disparity in the City of Toronto. They argue that the income disparities have reached new heights where wealth and poverty in extremes define the City.

The report also raises alarm about the urban poor, which in Toronto's case appear to be visible minorities and immigrants who do not posses adequate education or job skills required by the Toronto's specialized job market.

I have a hypothesis, which may help locate Toronto’s missing middle-class. I believe demographics and affordable housing are behind the trends  that the authors have highlighted in their report. The missing middle-class from Toronto, which comprise to a large extent of  immigrants from South Asia and the Asia-Pacific, has perhaps migrated to the outer suburbs in the Durham, Peel, and York regions of the Greater Toronto Area. Furthermore, non-immigrant households with children have also abandoned Toronto in search of affordable housing in the suburbia.

The question to ponder is why financially “successful” immigrants (well-educated professionals who have migrated in the past 20 years to Canada from South Asia and Asia-Pacific) not settle in droves in Toronto after they have gained some economic traction in Canada. And why those immigrants who struggle in the job market stay behind in Toronto?

It appears that the financially “successful” immigrants leave Toronto for demographic reasons. Multi-generational households with children and grandparents need larger homes, which are available in plenty in the outer suburbs and at affordable prices. A 4-bedroom house in a reasonable neighbourhood in Toronto costs in excess of $550,000. The same-size housing unit in a newer neighbourhood in the suburbs costs at least $100,000 less.

Larger household size of the new middle class immigrant households, which cannot be readily fit into the small-sized housing units in the transit accessible, and prohibitively expensive, neighbourhoods in Toronto, may partially explain why the “brown flight” has taken place.

The missing middle class has abandoned Toronto for the outer suburbs where affordable housing and new infrastructure is in plenty. The housing markets in Mississauga and Brampton, one of the fastest growing places in Canada with a combined population of almost a million people, are to a large extent driven by the immigrants from South Asia. Chinese immigrants drive the housing markets in the York Region, which is situated to the north of the City of Toronto.

The following graphic from the report reveals almost non-existence of extreme poverty in the outer suburbs in the greater Toronto Area, which is now home to the missing middle class from Toronto. 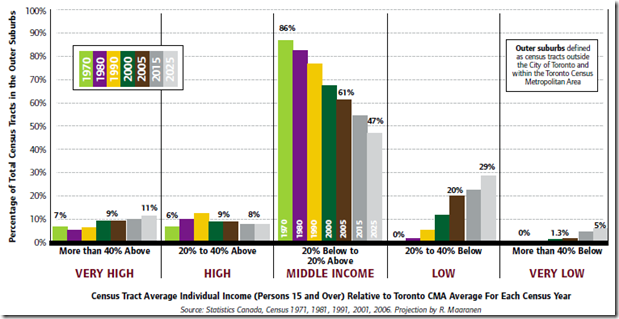 So what about the immigrants who stay behind? The answer lies in the availability of social services, e.g., shelters for homeless, subsidized housing and other similar facilities, which are more prevalent in Toronto than they are in the outer suburbs. It would make sense for households that rely on state's assistance to stay in Toronto to avail readily available social services.

Thus, Toronto's inner suburbs are now acting as the staging grounds or intermediate neighbourhoods for the new immigrants who save enough while living their to buy a home in the outer suburbs and eventually relocating their to start a new suburban life as the missing middle class of Toronto.

While the University of Toronto's study does not explain if the income polarization is causing further harm by limiting or preventing access to health-care, education, or the like for the low income households, it is still a very important contribution to the on-going debate on how to create  a socially just and egalitarian society.

Posted by Murtaza Haider at 7:50 AM