The homicide rate in Canada has largely remained stable over the years despite the increase in financial hardships in 2008.  According to the latest figures released by Statistics Canada for the year 2008, law enforcement agencies recorded 611 murders in Canada.  The 2008 numbers are slightly higher (17) than 2007 partly because of the increase in gang related violence in Alberta and British Columbia.

The homicide rate at fewer than two murders per 100,000 population, however, has remained more or less stable since 2000 in Canada. 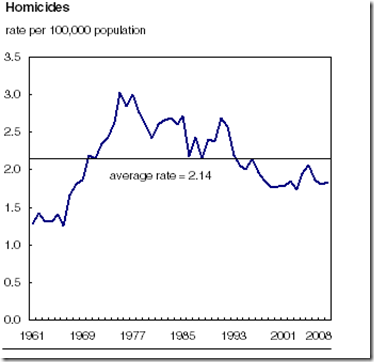 There has been an increase in homicides committed using a firearm.  According to Statistics Canada:

Of the 200 firearm homicides in 2008, 121 or 61% were committed with a handgun, 34 with a rifle/shotgun and 17 with a sawed-off rifle/shotgun. Over the past 30 years, the use of handguns to commit homicide has generally been increasing, while the use of rifles or shotguns has generally declined.

A breakdown by large cities with a population of or 0.5 million revealed that Winnipeg, Manitoba, recorded the highest murder rate , whereas Kitchener, Ontario, reported the lowest murder rate in Canada.  Canada's largest city, Toronto, reported a murder rate of 1.86 murders per 100,000 population trailing behind Vancouver, Calgary, and Edmonton.  The table below shows an east-west divide when it comes to murders in Canada.  The murder rate is much higher in the western cities than in the eastern cities.  Even with the presence of the organized crime in Montreal, the city reported a murder rate of 1.3, which is lower than that reported in Toronto.

Posted by Murtaza Haider at 2:28 PM