The book has not yet been out for a week and the price wars have already begun. Steven Levitt’s and Stephen Dunbar’s sequel to Freakonomics  was released last week. I picked up my copy of SuperFreakonomics at a Target store (not known for retailing books) in Los Angeles. I paid 30% less than the printed price of US$36.99 (suggested by the publisher). 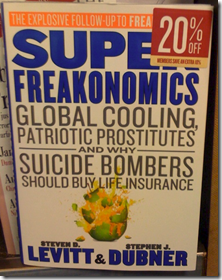 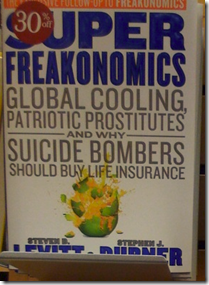 Amazon.com is retailing SuperFreakonomics for $16.47.

I am super-confused. It used to be the case that the publisher would first release the hardcover at a premium price. Months later, the paperback would hit the market priced roughly 30 – 50% less than the hardback. This is how Freakonomics sold over 4 million copies. I am confused because if the hardcover for SuperFreakonomics  is retailing for $16.47, the paperback may go for as low as $8. What kind of royalties are these two gentlemen looking at?

What could be behind retailing books the same way as groceries?  Do the publisher and retailers think that readers may find SuperFreakonomics rather reductionist, shallow, sensationalist, and lacking the shock value of the original Freakonomics. Hence the plan may be to cut prices now to muster as much sales as possible between now and the Christmas season. I also saw in the bookstores in LA that the yet to be released book of a newly minted author, Sarah Palin, is already been advertised at a discount!

Recall that Freakonomics was released in April 2005. The book took a year to reach its peak popularity in May 2006. Since then there has been a steady decline in the interest in Freakonomics. The graph below tracks the searches conducted using Google for Freakonomics since 2005 depicting a downward trend in the interest.

There could be many reasons for the lackluster interest in SuperFreakonomics . The most important one is that the novelty of pop-economics texts has worn off. Freakonomics` success inspired many others to produce similar texts.  Thus Malcolm Gladwell (eg., Tipping Point) and others, who adopted Freakonomics recipe, produced successful texts that hit the market between 2007 and 2009.

Secondly, the freakonomics blog is also to be blamed. Levitt and Dunbar have been blogging from the New York Times website on very similar topics that they discuss in SuperFreakonomics. The blog has made them even more accessible to the average reader. This takes away the mystery. Plus the reader already knows that the authors will be blogging about the book, so why bother buying it.

I am certainly not suggesting that SuperFreakonomics may be a flop. Quite the contrary. The book will be a best seller.  However, the payoff this time around will not be as great because the focus is on volume rather than prestige. As of October 27, the sales rankings for SuperFreakonomics from Amazon.com were as follows.

Lastly, what will happen when Wal-Mart starts selling books. I can foresee the paperback edition for SuperFreakonomics retailing for$5 at Wal-Mart. I would hate to be an author at a time when books will be sold alongside T-shirts.