According to Statistics Canada, the latest figures on tuition fees in the institutes of higher learning in Canada suggest a 3.5% increase in tuition fees even when the inflation in Canada dropped by 0.8%. A breakdown by provinces is presented below. Ontario with $5,951 and Quebec with $2,272 reported the highest and the lowest undergraduate tuition fees respectively. Surprisingly, while the cost of living is very high in British Columbia, the tuition fees in BC are comparable to the ones in PEI.

Ontario saw the highest increase in tuition fees at 5% whereas Nova Scotia experienced a decline. The Ontario legislature saw some sparks fly on the issue. See the exchange between Jim Wilson (PC) and John Milloy, minister of education in the following video: 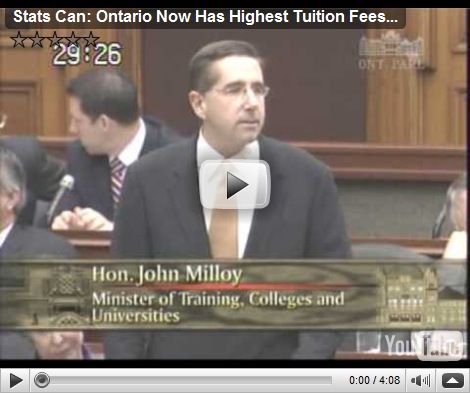 I continue to believe that freezing tuition fees spells disaster for the quality of education. Even the celebrated schools in the UK, i.e., Cambridge and Oxford, are facing severe hardships because of the tuition freezes that are often accompanied by a decline in government funding.