Yesterday was indeed a sad day for public servants in Canada when one of their finest had to resign in order to best serve his country. Dr. Munir Sheikh, in his resignation letter, has offered Statistics Canada’s assessment that a voluntary survey cannot be a substitute for the mandatory survey.

The controversy started with the federal government trying to change the mandatory nature of the long form of the census to a voluntary one. The Industry Minister implied all along that his decision was backed by the world reputed Statistics Canada. Dr. Sheikh’s resignation letter (which was hurriedly removed from the agency’s website today, but we had preserved it yesterday) however has set the record straight. 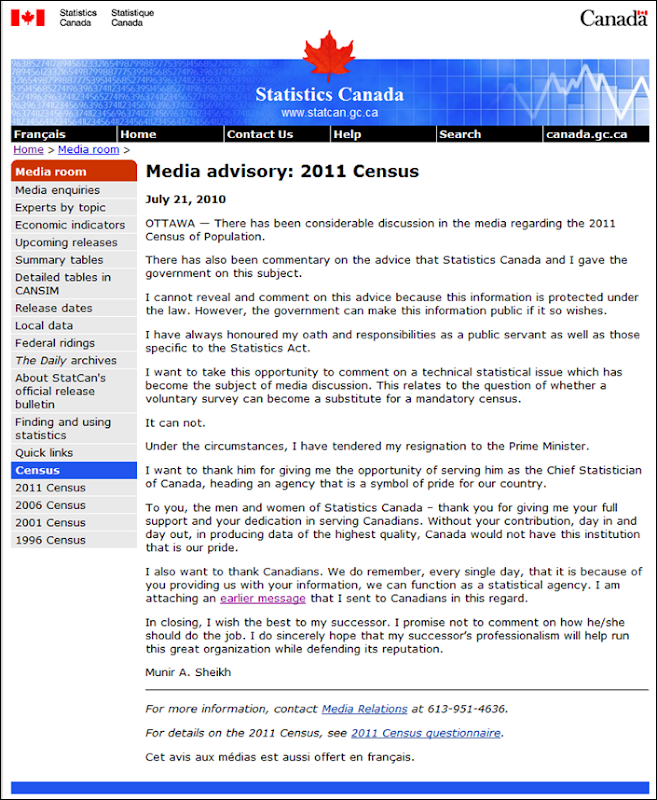 Industry Minister Tony Clement claimed multiple times that Statistics Canada was in agreement with his decision to change the survey form. Munir Sheikh’s resignation proves that this was never the case.  We believe that Minister Clement should therefore resign as a minister and as a member of the Parliament for misrepresenting and maligning one of Canada’s finest institution.

It was only a few weeks ago that Minister  Clement asked Canadians to trust Statistics Canada on the controversy surrounding census’s long form. In his resignation letter, the former chief statistician, Dr. Munir Sheikh, has explicitly stated that the voluntary survey cannot be a substitute for the mandatory survey.

I do trust Statistics Canada and after learning the agency’s opinion, I now request Mr. Clement to reverse his decision, which has already been criticised by academics, businesses, and charities.

Mr. Clement had also argued that some of the data collected in the long form was not needed by the government. This is hardly the case unless one assumes that Minister Clement represents all government in Canada. The opposition to his decision by most provincial and all municipal governments suggest that Mr. Clement has exceeded his authority by making a statement on behalf of all tiers of governments and crown corporations, who rely on the census to deliver critical services to Canadians.

Minister Clement has further argued that the decision to change mandatory long form census to voluntary was based on the government’s belief that it should not ask intrusive questions of Canadians. This gives the impression that Prime Minister Stephen Harper’s government respects individual rights and freedoms.

The reality, however, is quite different. This is the same government that refused to spend a dime of foreign aid to provide safe abortions to women in developing countries. It’s a government so blinded by its ideology that it felt entitled to tinker with women’s health. This government is not even remotely concerned about individual’s rights and freedoms.

It is imperative for Canadians to speak out to prevent this government from doing irrevocable damage to Statistics Canada and to ensure that informed decision making practices, which rely on Census data, continue in Canada.

The Minister is also misguided in his assertion that the voluntary survey will have a larger unbiased response. The US Census Bureau in 2003 compared the response rates for the mandatory American Community Survey by sending a portion of the respondents the same survey but indicating that their response was voluntary. The change from mandatory to voluntary survey resulted in a huge 20.7% decline in response rate.

Lastly, the US Census Bureau also concluded that the voluntary survey would be much more expensive ($59.2 million more in 2005 dollars) to conduct than the mandatory survey.

Canadians will be well-served if Mr. Clement would come to his senses and leave the census as is. Or better, he should simply resign.

Posted by Murtaza Haider at 5:44 PM