Econometrics is a hard science. it involves advance calculus and thus it is not appealing most interested in the American or Indian or some other Idol.

Singapore comes second in the interest in econometrics. However, being a financial and academic hub, it should not be much of a surprise. New York, with the abundance of financial services firms and higher education institutions comes third. Also, Bill Greene, author of Econometric Analysis, and Robert F. Engle, Noble Laureate in Economics for ARCH and GARCH models, both reside and teach in New York.

Delhi at 4th suggests the fast and sustained rise of the academia in India. New Delhi is the federal capital of India and is also home to a large number of institutions of higher learning. Econometrics must be important to them all.

With David Hensher in Sydney, I am not surprised at Sydney being 5th. There is a growing interest in discrete choice econometrics in Sydney. Toronto on 6th may not be a big cause to celebrate until one realizes that London is trailing Toronto at 7th.

In summary, the top ten cities interested in econometrics are the cities of knowledge and econometrics is the tool of choice for many a researchers. 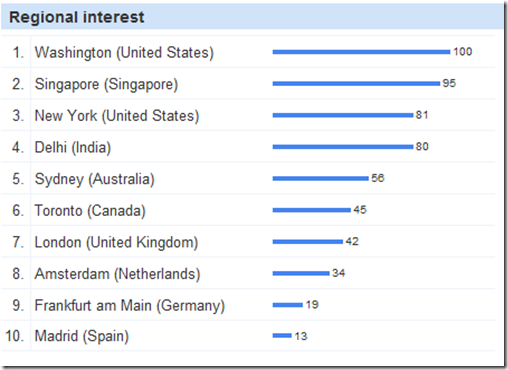 The following graph is live and presents the phrases that internet surfers have used while searching for econometrics. Notice that Jeffery Wooldridge, author of the famous text Introductory Econometrics, is listed among the top ten searches for econometrics.
Posted by Murtaza Haider at 6:35 PM