Mattel unveils a veiled Barbie! Whatever it takes to make a sale

Finally, Barbie adorns a burka. The iconic doll that has sold millions over the years, has embraced hijab and burka. From headscarf to an all engulfing burka, the doll is at last Sharia-compliant!

Is it a marketing ploy to attract the middle class in Muslim countries or is it that the age has finally caught up with Barbie, who has turned 50 this year. One can't tell if the burka in the photograph below is covering a pigment-corrected Barbie or her long-time boy friend Ken. 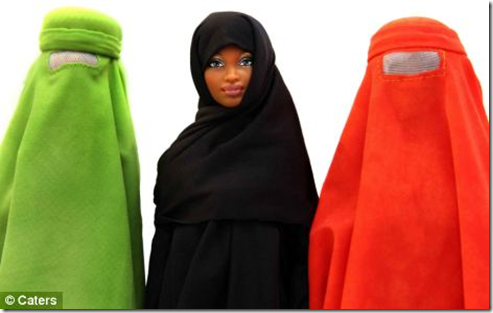 The makers of Barbie, Mattel, is supporting the new Burka Barbie, which is a creation of an Italian designer Eliana Lorena, and was unveiled in Florence, Italy, as part of a charity auction organized by Sotheby’s.

Sotheby’s has promoted the new Barbie as wearing a “traditional Islamic dress.” This amounts to generalization of the highest order. I can see Tarek Fatah (ban the burka campaign) spinning in his chair!

The notion of a traditional Islamic dress is indeed a false one. Languages, cuisines, and clothes are influenced largely by culture and to an extent by religion. While Islam may dictate what meet is kosher or Halal, it certainly does not mention what spices to use and how long to cook. Similarly Islam suggests modesty in clothing, but does not dictate concealing one’s face.

Hiding behind the notion of a “traditional Islamic dress” is a not so covert attempt by the Arabs to export their cultural norms to non-Arab Muslims. Iranians try to do the same with Shiite Muslims. The bundling of culture and religion is almost akin to two for the price of one: one embraces Islam and gets the Arab culture for free.

The South Asian Muslims living in India, Pakistan, and Bangladesh account for 50% of all Muslims. Add to this large number the Indonesians and Malaysians, and we have 75% of the billion-plus Muslims who are culturally non Arab when it comes to language, food, and dress, among others. The non-Arab Muslims have been practicing their Islamic faith and celebrating their non-Arab cultures for centuries. Their dresses, foods, and languages are part of the global cultural heritage. Why should one deny this diversity by throwing a cloak over it?

The burka has served as an instrument to oppress women in many societies, many of those are Muslim. The burka hides the individual’s identity. We don’t recognize other humans by their silhouette, smell or voice. Our faces are indeed our primary ID. We even communicate without words using our eyes, eyebrows, and wrinkles on our forehead. A burka even denies one the right to communicate with a smile.

It is sad to see that the West continues to practice doublespeak: banning burkas in France and showcasing burka-clad Barbie in Italy. One should not let short-term profiteering dictate one’s decisions that may have a long-term adverse impact. The Burka Barbie may register some additional sales in the Muslim countries. However, it will be at a cost of legitimizing women’s exploitation in many societies. This is too big a cost for short-term profits.

I am certainly not advocating a ban on burkas. This amounts to a dictatorship and exploitation of a different kind. I am advocating the need to educate young Muslim men and women about their rights and responsibilities. How can the young Muslim women, which are part of the demographic dividend in the Muslim world where younger cohorts constitute the majority of the population, be enfranchised politically, socially, and economically is a challenge that the Muslims have to embrace now than later.

Also, the decision to wear a burka or otherwise should also be a woman’s decision alone. President Sarkozy of France, Tarek Fatah of ban the burka fame in Canada, and I should not be the dictators. 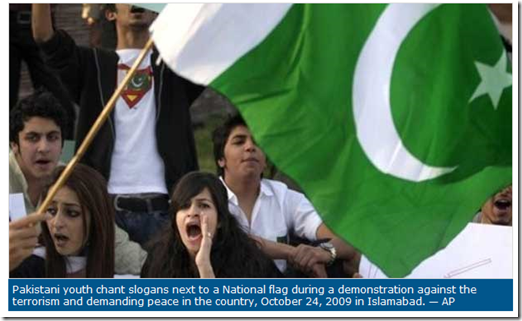 Posted by Murtaza Haider at 2:25 PM