According to Hitwise, an internet market research firm, Expedia Canada is the most popular travel website in Canada followed by WestJet.ca. Surprisingly, Canada’s largest airline, Air Canada, lagged behind in the internet traffic to that of the WestJet. 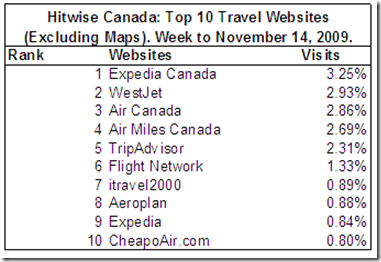 When one takes a closer look at the traffic recorded in the October, one finds a peaking on Wednesdays in the traffic to Air Canada's website:

The traffic data for November 2009 are not available from Google Trends. It will be interesting to compare the data against HitWise once Google updates the database to see why Air Canada has scored poorly with HitWise.

Since West Jet is an Alberta-based airline, it carries more clout and prominence in Alberta. Whereas Air Canada being the national flag carrier, it should have a more Canada-wide appeal where the traffic to its website should be proportionate to provincial populations such that the highest traffic to be generated by the most populace province, i.e., Ontario and the least traffic be generated by the least populace province, Prince Edward Island. This bears out in the following graphics where traffic to the WestJet website is disproportionately high in Alberta.

Meanwhile, the cyclical nature of tourism based travel in Canada is presented to the graph below.  Canadians travel primarily during the Christmas season and summer. The graph below reveals the rising trend as of late 2006 to mid 2008.  However, owing partially to the recession blues, the interest in tourism based travel has been down this year, apart from a peak in July 2009 when the interest in travel improved by 10%, keeping in line with the summer travel interest observed in the previous years.

Posted by Murtaza Haider at 7:35 AM