[Data and maps in this blog are obtained from Statistics Canada]

While those employed in the financial industry are coming up with the spending plans for the bonuses heading their way in December, it appears that not all in Canada share they good fortune. The latest figures for the unemployment insurance suggest that the number of UI recipients suddenly rose by 54,300 (7.1%) in September 2009 after falling for two months preceding September. 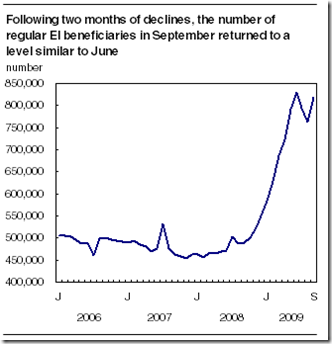 The total number of UI recipients in September 2009 reached 818,000, which is 64% higher than the one observed in October 2008. The largest increase in UI recipients was observed in the three largest English speaking provinces namely, Ontario, British Columbia, and Alberta.

The number of beneficiaries increased in Ontario by 9% in September 09. The unemployment losses in Ontario are driven by the losses in the manufacturing sector. The increase in Alberta was even more drastic at 25%. It appears that Alberta’s petro economy has run out of steam.

I am wondering how this increase in UI recipients reconciles with the  increase in housing prices and volume of trades in the resale housing market in Canada. Where are the funds and confidence coming from if the job market remains volatile.

The spatial distribution of change in UI recipients for urban Ontario and Quebec is presented below where the colour coded map presents the percentage change in number of people receiving Employment Insurance regular benefits, September 2008 to September 2009, by Census Metropolitan Areas (CMAs) and Census Agglomerations (CAs). 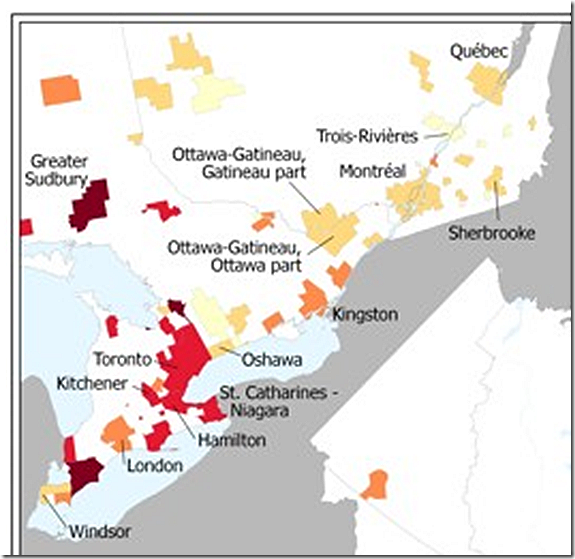 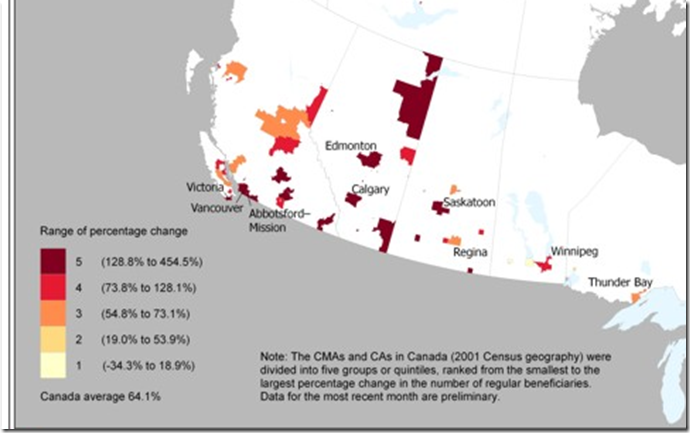 Posted by Murtaza Haider at 4:56 PM