The latest figures also show that the decline in transportation fuel costs has also slowed down in 2009 compared to the steep decline in 2008 (see the figure below). Once the fuel costs stabilize or begin to increase, the rate of increase in consumer prices in Canada will likely increase. 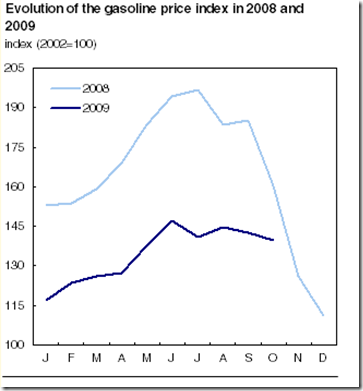 The latest figures from the housing market suggest an early heating up of the market in Canada in the unlikely month of November.  The impact is more pronounced in Ontario where housing prices have certainly experienced a sudden increase along with an increase in the number of transactions.  The intensity in new home sales in Ontario may partly be driven by the fact that new home purchases would become more expensive by July 2010 when the new harmonized sales tax comes into effect.  Currently, new home purchases are subject to the GST and are exempted from provincial sales taxes.

The increase in the price and volume of existing home sales is probably driven by the consumers who have stayed on the sidelines through most of 2008 - 2009, waiting for the economy to improve and the prices to fall down further.  Now that the housing prices are no longer falling, consumers are convinced that the market has had hit the rock bottom, and are therefore willing to invest in the housing markets.  At the same time, historically low interest and mortgage rates are making initial purchases and mortgage payments extremely affordable.

With the increase in transportation fuel costs and the likely increase in the retail sales volume in the Christmas season, we are likely to see an increase in consumer prices in Canada, which is likely to have a positive impact on the size of our economy. 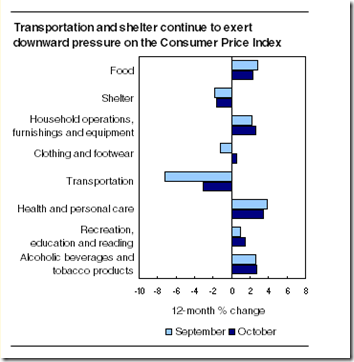