Not since the seminal work by Meyer, Kain, and Wohl on the Urban Transportation Problem, which was published by the RAND Corporation in 1965, has any one been so insightful as Professor Richard Florida of the University of Toronto.  In his blog hosted by the Atlantic,  Professor Florida has found the drive alone mode to be negatively correlated with the following demographics, among others, at the State 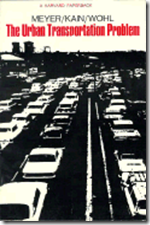 level in the United States:

Prof. Florida’s analysis provides us with enough insights to formulate urban transport policy recommendations to discourage drive-alone mode in the United States. These are:

On a serious note, I have the following concerns about the professor’s analysis:

Prof. Florida’s blog is reproduced below:

Earlier this week Catherine Rampell posted this map over at Economix. It shows the percentages of workers who drove to work alone by state and is based on U.S. Census data.

D.C. has the lowest rate - a fact which was not lost on D.C. blogging circles. NY did well too.  The worst performers were Alabama, Tennessee, and Ohio, where about eight in 10 workers drive alone -  more than double that of D.C.

With the help of my colleague Charlotta Mellander, we took a quick look at some factors that might be associated with this geographic pattern. It's not an exhaustive list: We examined some key economic factors like income and economic output, human capital and the creative class, and psychological ones like happiness, stress, and personality. We removed D.C. from the analysis because it was such an extreme outlier. We did not develop or run any serious multivariate analysis - just simple correlations, or associations, between variables.


Still the findings point to some reasonably clear patterns.
Income and Economic Output: The richer the state, the less likely people were to drive alone. Driving alone was negatively correlated with state income levels (-.46) and output per capital (-.41).

Class and Human Capital: States with higher percentages of college graduates (-.47) and the creative class (-.43) were less likely to have people driving alone. Driving alone was much more likely in states with large working class concentrations (.62).

Professional and Creative Jobs: Driving alone was less likely in states with high concentrations of virtually every type of professional, knowledge-based and creative jobs. But it was least likely in states with large concentrations of artists, designers, and entertainers (-.63), architects and engineers (-.61), scientists (-.56 ), and lawyers (-.55).

Diversity - Immigrants and Gays: Driving alone was less likely in states with high concentrations of immigrants (-.51) and gays (-.41).

Personality: Psychologists identify five main personality types. Driving alone was more likely in states with high levels of three of them: extroverts (.29), conscientiousness (.36), and agreeableness (.44). Interestingly, there was no association between driving alone and the two other types - neurotic and openness to experience, which some might say makes it harder to explain New York.

Posted by Murtaza Haider at 4:43 PM